I was so impressed while watching X Factor – Austin, Texas auditions when Ms. Panda Ross stepped on stage.  I was moved by her presence, she was full of spunk, lots of smiles and just so real.  I enjoyed her as she expressed her love for show Creator and Judge, Simon Cowell.  She made it very clear that she was there for Simon.  The fact that she signed herself out of the hospital the day before to make sure she got her opportunity to audition, and claim her love for Simon – her Baby Daddy as she affectionately calls him:)  Panda was in the hospital for seven days diagnosed with pneumonia.

Panda belted out a soulful Sam Cooke song “Bring it on Home To Me” and moved not only the judges, but the entire audience along with the millions of viewers like me, tuning in at home…the girl can sing!  She even had a funny story about how she got her name; her mother was in jail when she was born and her cellmate was white, and they came up with Panda – hence the black and white.  After rocking the house, Panda was so excited that she had to be rushed back to the hospital. 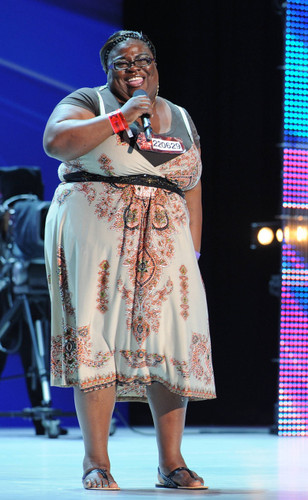 What inspired me to write about Panda is her drive and confidence.  I was inspired by the fact that she did not let being in the hospital stop her from going after her DREAM…and for that Black Women Stand Up (BWSU) salutes the bubbly, full-size, diva – Ms. Panda Ross:)  Check her out below in the video from her  X Factor debut.

BWSU provides business opportunities, offer strategies for business and personal growth, along with support in living a healthy and harmonious life.  We spotlight everyday women doing amazing things; to inspire other women to become their BEST SELF through our “Goddess Spotlight” Features.  And our “Kings Korner” is where we highlight Black Men.

Follow Black Women Stand Up on WordPress.com
Join 1,840 other subscribers